There are two pieces of furniture in the genre that anchor a small alcove within a grand 19th century refurbished home thus creating an inviting private seating spot. 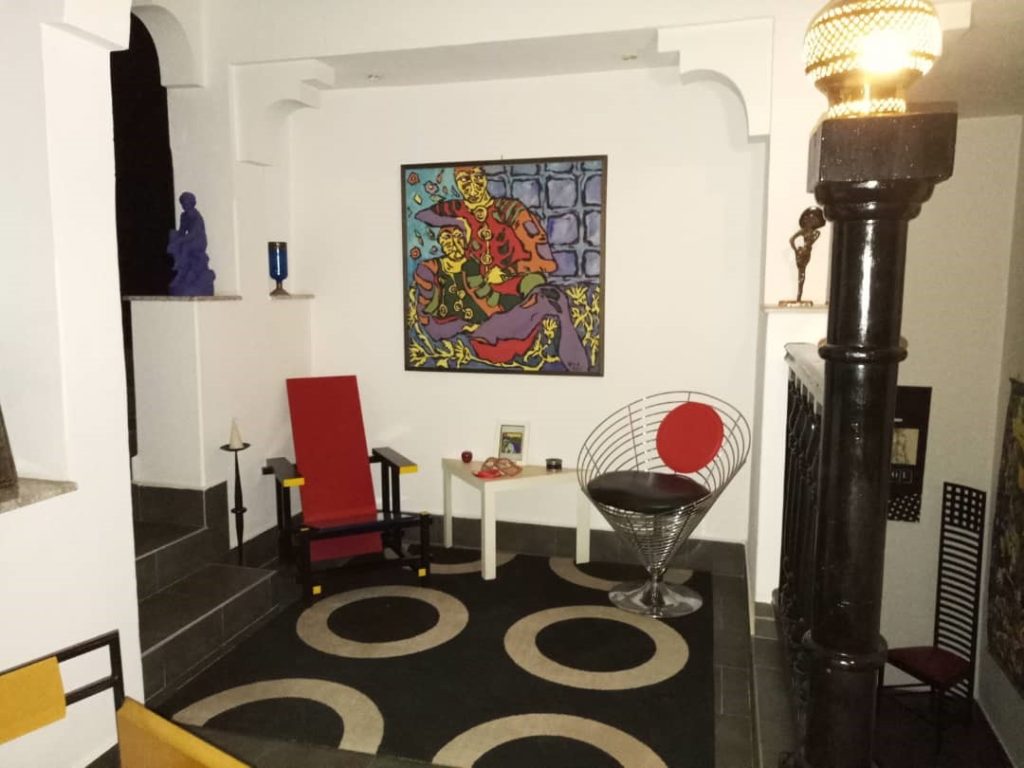 The Red Blue Chair was designed by Gerrit Rietveld in 1918. It is a study of the interaction of rectilinear volumes in the horizontal and vertical planes.

The red, yellow and blue – and black colors were applied 5 years later in 1923 in consonance with the de Stijl group who had Piet Mondrian as their most famous practitioner.

You are certainly not alone if the chair reminds you of artwork by Atta Kwami; the rectangular color bands are quite similar.

Both Kwami and Rietveld were striving for an elusive harmonic and humanistic order.

Verner Panton originally designed the cone chair for a Danish restaurant. It is based on the geometric figure and is mounted on a stainless steel swivel base.

At the back, the semi circular shell is high enough to form the torso and arm supports, making it exceedingly comfortable.

This contrasts with the Rietveld where concerns about physical comfort were not paramount.

Again, if the shape of the cone chair reminds you of the classic Mangbetu headdress from Central Africa, then you are not too far off.

The geometric theme, within the alcove, is further emphasized by the triangular coffee table and the prominent circles in the area rug.

The painting hanging between the two chairs is an abstract expressionist piece by the Marrakech domiciled artist Edith Taioni and Sylviane Maes.

There are two figures shown; one is in a reclining posture and the other stands to the left of the former.

The upright figure supports the former’s head with the right hand and props up the same torso with the left.

Is this a Good Samaritan assisting a distressed stranger to ease his afflictions or pray tell, is this a representation of the new phenomenon – assisted suicide?

Whatever it is, there is no mistaking the concern etched on the faces of both individuals. The fragmented background of the painting adds to the angst of the viewer.

4 thoughts on “A QUIET SEATING ALCOVE.”