Does history provide for such formidable cultural connections between Africa and the UK that enure to London’s benefit with respect to contemporary African art (CAA)?

Last year London had a long list of new galleries and several institutions expanded their collections of CAA. Bonhams continued with its pioneering CAA auction sales and recorded steady growth.

The entry of Sotheby’s – another blue chip auction house in London, into the market process should help accelerate the development of the CAA landscape. 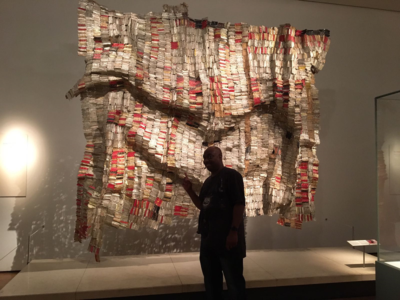 “Man’s Cloth” by El Anatsui in the British Museum, London, June 2017. (Picture courtesy of Lamley Andrews, age 12 years; in the foreground is her Dad).

Need we recall that in May 2016 and once again in London, El Anatsui’s wooden sculpture, “Old Towel” had set a record for his wooden pieces?

London and Paris both share an analogous historical relationship with Africa. But London appears to have an advantage over both  New York and Paris with respect to the market for CAA. 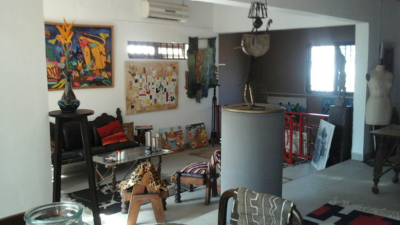 New York does not have the cultural connections with Africa that London and Paris have. But that may change in the not too distant future.

Hannah O’Leary, Sotheby’s head of modern and CAA opines that, “if you look at the art market as a whole, London definitely sits at the forefront of the more international collecting categories and the reason is that many of these collectors from these countries pass through London “.

Again to London’s credit, the 1:54 Contemporary African Art Fair was launched there in 2013. The 5th edition is scheduled from October 5 to 8 this year at the Somerset House during Frieze Week.

It has been reliably estimated that 90% of the collectors visiting the fair are foreigners, with African buyers- especially Nigerians, on the ascendancy.

There will be 41 galleries from 18 countries; 18 African galleries will participate. To date this will be the most geographically diverse edition of the fair.

Gallery 1957 located within the Kempinski Gold Coast Hotel in Accra is on the list of exhibitors.

Newcomers to the event include Galerie 127 from Gueliz, Marrakech and SMO Contemporary Art of Lagos.

It is difficult to predict if London will retain its pivotal role in the CAA market once the UK’s EU status changes.